Showing posts from April, 2018
Show all

How Would You Like to Walk in Michael Jackson's Shoes 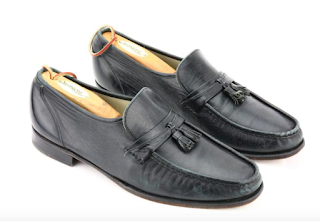 If you have ever wondered what it would be like to walk in Michael Jackson's shoes, you now have the opportunity. Jackson's "Motown 25" Florsheim Imperial Loafers are being offered by GWS Auctions, with the auction closing at noon on May 26, 2018.

This iconic pair of shoes were worn by Jackson for the Motown 25 TV show during the rehearsal of "Billie Jean", which makes it the very first time Michael Jackson ever performed the famous moonwalk on stage.

The soles of the shoes are signed "Michael Jackson". The shoe size is 9 1/2 E.

First, I am not an attorney. Second, I am not giving legal advice. What I am doing is giving you suggestions on what you should discuss with your estate attorney. If you are reading this article, you most likely already know what a revocable living trust is, so I don’t need to mention anything regarding these trusts. Plus much of the information on living trusts can be found on numerous websites. Many people save their estate paperwork in their safe deposit boxes, including wills, trusts, powers of attorney, and so forth. Other items may be in the boxes such as jewelry, coins, stamps, gold, silver, collectibles, and cash. Don’t Let Your Safe Deposit Box Get Drilled Without Your Knowledge One issue you should be aware of. Apparently, banks have started drilling boxes and removing contents of boxes rented by customers without the customer’s knowledge, for which the banks claim that they din’t have all the account information of their customers (primarily …
Post a Comment
Read more
More posts