Showing posts from September, 2010
Show all

September 23, 2010
A anonymous American multi-millionaire has left $8 million to the Wombat Awareness Organization in Australia, an organization dedicated to the large scale rescue and rehabilitation of the Southern Hairy Nosed Wombat. The donation will be made in increments of $1 million per year.
Post a Comment
Read more

September 05, 2010
A UFO landing pad has been built in a small town in southwest part of France, paid for by the town council. But you won't be able to land your Cessna or Gulfstream there (unless you are a Martian). The UFOport is only available for extraterrestrial spacecraft. I'm assuming that if there was a landing, it would certainly help the local economy.
Post a Comment
Read more 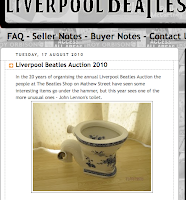 Here's an auction you can take sitting down. A porcelain toilet owned by Beatle John Lennon while he lived in Berkshire, southern England, was sold at a Beatles memorabilia auction organized by the Beatles Shop in Liverpool. It was hammered for almost $15,000 , around ten times its estimate. It's lucky for the buyer that the toilet didn't end up in the dump. Shipping the object to the owner's home probably involves a big movement with lots of packing, otherwise, option number two would be carrying it on the plane. I guess you could use it as a large flower pot or a stool.
Post a Comment
Read more

How would you like a $2 million mansion in Marin County, California for only $150? It's possible if your ticket is drawn, in this raffle for the wealthy. For a $150, you have the chance to win a 3600 square foot mansion on over half an acre with four bedrooms, four and a half bathrooms, a bonus room, a study, a guest suite, and an office. Included are terraced gardens, a pool and a spa. Marin County is generally considered to be the wealthiest county in California with Santa Clara County giving it a run for its money. This New Age liberal county, although known for its wealth, still has its share of its poor, which is why this raffle is being held. Proceeds will go towards Community Action Marin, which provides support services such as early childhood education, mental health, employment and job training, food programs, housing assistance, HIV and AIDS services, and other types of programs. If you buy your ticket early, you will be automatically entered in the early bird draw
Post a Comment
Read more
More posts