Showing posts from May, 2013
Show all

May 30, 2013
If you are a devoted celebrity fan, this may be the house for you. The mansion, currently owned by Bruce Willis, and the former home of Michael Jackson, Lucille Ball and Desi Arnaz, is now up for sale for only $22 million. This 10,000 square foot home has five bedrooms, plus four additional bedrooms in the guest houses, has almost an acre of land. It also has a movie theater, library, and tennis court. The estate is located in Beverly Hills .
Post a Comment
Read more 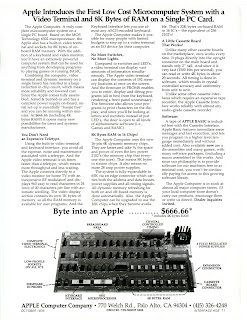 Would you pay $671,400 for a personal computer? You probably wouldn't want to pay even one hundredth of that, even for a top of the line computer with maximum RAM memory and hard drive space. Especially on that is out of date. Well guess what? An Apple I computer, also known as an Apple-1, just sold for $671,400 to an Asian collector through an auction held by a German company. This was one of the original computers sold by Steve Jobs and created by Steve Wozniak back in 1976. The original sales price for these computers was $666.66 and later on in 2007, the collectible price for these computers was $15,000 to $25,000. Not such a bad return, going from about $20,000 to over $670,000 in just six years. That's an 80% average annual return!!!
Post a Comment
Read more

Check into a Hotel Get a Gold Plated iPad

May 26, 2013
At the Burj Al Arab hotel in Dubai (that's the one shaped like a giant sailboat), when you check into a hotel, you receive a gold plated Apple iPad . [Thanks for finding this, Gizmodo.] The gold iPads are used as a "virtual concierge," providing info about the hotel and its amenities. On the gold backing of the gold iPad, it has the Burj Al Arab logo.
Post a Comment
Read more
More posts