Showing posts from November, 2018
Show all

The Yellow Brick Road May Be Paved With Gold: Wizard of Oz Scripts for Sale 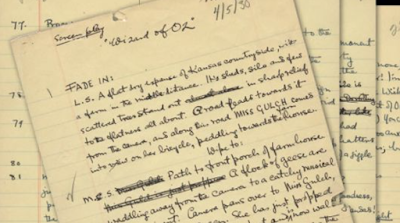 Are you a fan of the Wizard of Oz ? Do you try to watch Dorothy and Toto whenever it's on TV? Then the original draft scripts for the Wizard of Oz movie are now up for sale . The Los Angeles, California auction house, Profiles in History, will be auctioning off four original draft scripts of the movie, handwritten by screenwriter Noel Langley. These were written in April and May of 1938, a year before the film was released. As part of the lot, over a dozen photographs of special effects, such as the tornado sequence, will be included. These items will be auctioned during the Profiles in History Hollywood Auction 96 taking place on December 11 through December 14. This lot of items is expected to be hammered at between $800,000 and $1,200,000. Photo courtesy of Profiles in History
Post a Comment
Read more
More posts