Showing posts from May, 2017
Show all

Yesterday, GWS Auctions, Inc. held an auction of entertainment related memorabilia, including items relating to Marilyn Monroe and the Beach Boys. But the highlight of the auction was Elvis Presley's personally owned private 1962 Lockheed Jetstar Jet. This is the only Elvis airplane that is privately owned with the others owned by the Elvis Presley Museum. According to the auction lot description: " This jet was personally owned by Elvis Presley, and is the "Lost" jet he owned with his father, Vernon Presley. The jet has been featured on TV with National Geographic, and has been a huge tourist attraction at the airport in Roswell, NM. According to our seller, portions of the plane’s interior were custom designed to Elvis' specifications, including the gold-tone hardware, woodwork, inlay, red velvet seats and red carpet." The jet was estimated to sell for $2,000,000 to $3,500,00 but ended up being hammered for $430,000 .
Post a Comment
Read more

Now You Can Own the Original Batmobile 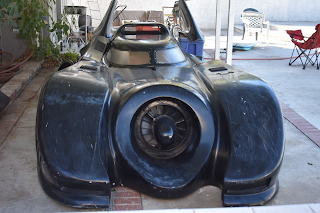 Up for auction by Propdomain through iCollector is a Batman and Batman Returns original screen used Batmobile. According to the auction listing: " This is one of the original Studion Production made BATMOBILES Screen Used in the first two Tim Burton BATMAN films. BATMAN & BATMAN RETURNS! Obviously one of the stunt cars as both Heroes remain in their archives. From what I understand only 3 cars were built for the first film. The 2 Heroes and this one they called "The Gurney Car", though a few insert pieces were used like the close up cockpit. This car never ran or drove, though it did steer! It was parked, towed, pushed, or ran along a rail while explosions went off and close crashes involving other vehicles were filmed to avoid damage to the Hero car." The current bid is $15,000 and the auction closes May 27, 2017 at 10 am Pacific Time. You can see more pictures and get more information about this rare item by going to iCollector .
Post a Comment
Read more 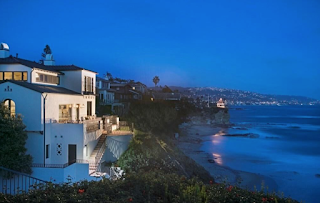 Charmer  Diane Keaton , in her trademark suits and turtlenecks, is most well known as an Oscar-winning actress in films that are today's classics.  From her first appearance in  The Godfather  to her Oscar-winning performance in  Annie Hall  and a string of other great films chalking up $1.1 billion in box office sales, Keaton also found time to date both Warren Beatty and Al Pacino. Now at age 71, Diane has not slowed down having written three books, well-known for her photography, mother of two adopted children, and owns her own wine company, The Keaton, with reds described as rich and intense and a new white wine on its way. In her spare time, she is a real estate tycoon with a long history of buying, remodeling and selling houses in enviable Southern California locations. Newly offered for sale is a  Laguna Beach house  steps from the sand and with views of the Pacific Ocean, beach and rugged cliffs spilling into the ocean. Built in 1928 for the J. Roy Smith or
Post a Comment
Read more
More posts